Every second, each square centimetre of us and our Earth is hit by about 10,000 cosmic rays. These charged subatomic particles have a profound impact on our climate, but had never been measured in the High Arctic at sea level… until now!

On board a boat sailing in the high Arctic, around the Spitzbergen, well above the polar circle, a special detector is catching cosmic rays coming from the distant regions of our universe: PolarQuEEEst, a project by Centro FERMI Rome. Built at CERN and operated by physicists from INFN Bologna and INFN Bari, PolarQuEEEst is the first detector to measure sea-level cosmic rays at high-latitude.

Throughout the detector’s month-long voyage, it is accompanied by Ombretta Pinazza, CERN physicist with INFN Bologna, and physics student Alberto Rolandi of EPFL Lausanne. This duo sleeps right next to the detector, ensuring that data is gathered correctly despite the tumultuous conditions of life on board. Ombretta and Alberto have already managed to send some data samples to their colleagues on land using the Iridium satellite phone: “The detector has been performing very well so far,” wrote Pinazza from Nanuq. “My colleagues have already been able to analyse the small datasets we’ve sent!”

PolarQuEEEst’s data will help answer open questions about the Earth’s geomagnetic field. As the planet’s main protection from radiation, the geomagnetic field is what makes life on Earth possible. “When magnetic field lines converge at the poles, they attract low-energy cosmic rays,” says Ivan Gnesi, cosmic ray physicist with Centro Fermi. “We already know that the flux of these rays is thus higher at the poles, and lower at the equator, but we did not have any measurements of these cosmic rays above 60 degrees North. On board Nanuq, the PolarQuEEEst detector will reach 82 degrees north.”

The PolarQuEEEst team is especially interested in looking for anomalies in the geomagnetic field – spots on our planet where there is an unusual cosmic-ray flux. “There is one famous anomaly, the South Atlantic anomaly, where you see a higher-than-expected flux of cosmic rays coming to the Earth. This is a location where, in principle, the geomagnetic field should be strong enough to protect us,” adds Gnesi. “There may be something like this in the Arctic – we don’t know yet!”

New measurements of cosmic rays can also provide insight into our climate. These rays play an important role in the formation of clouds, which in turn affects the penetration of solar radiation into the Earth’s atmosphere. The more clouds, the cooler the temperature. This is our current understanding of the temperature fluctuations of our planet over the past millions of years.

The PolarQuEEEst detector isn’t alone in its mission. As part of the Extreme Energy Events (EEE) project coordinated by Centro Fermi, it is synched with cosmic ray detectors across Europe. “These detectors can work together to create an extended observatory, allowing us to ­­­examine the cosmic ray flux from multiple points on the planet at the same time,” says Gnesi.

While the design of the PolarQuEEEst detector based to those in use on land, it has had to be significantly adapted for life at sea. The team was tasked to create a detector of equal efficiency, but less than half the size, robust enough to withstand heavy waves and only consuming 12 W of power! They rose to the occasion, and PolarQuEEEst’s excellent operation throughout the journey is a credit to their great work.

“PolarQuEEEst is a very challenging extension of the EEE Project,” says Professor Luisa Cifarelli, current President of Centro Fermi. “By using the most up-to-date technology developed at CERN, it creates a beautiful bridge between the present and the past in this amazing polar expedition. ” 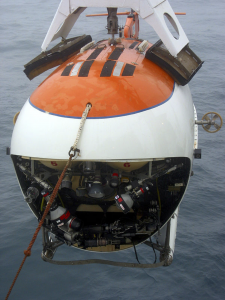 Professor Zichichi is founder and first President of Centro Fermi, and a supporter of the PolarQuest project. This is not the first time Professor Zichichi has sent cosmic ray scintillators to the North Pole. In 2007, he entrusted two scintillators to Russian polar explorer Artur Chilingarov, who, in an unprecedented and perilous mission, descended 4500 m under the exact geographical North Pole in a deep-sea submarine, to drop a Russian tri-color cast in titanium onto the seabed. During the operation, he measured the cosmic ray flux under the North Pole using Prof. Zichichi’s scintillators for a couple of hours.