Miriam Santoro, Italian researcher on the POlarQEEEst experiment tells us about Cosmic Rays 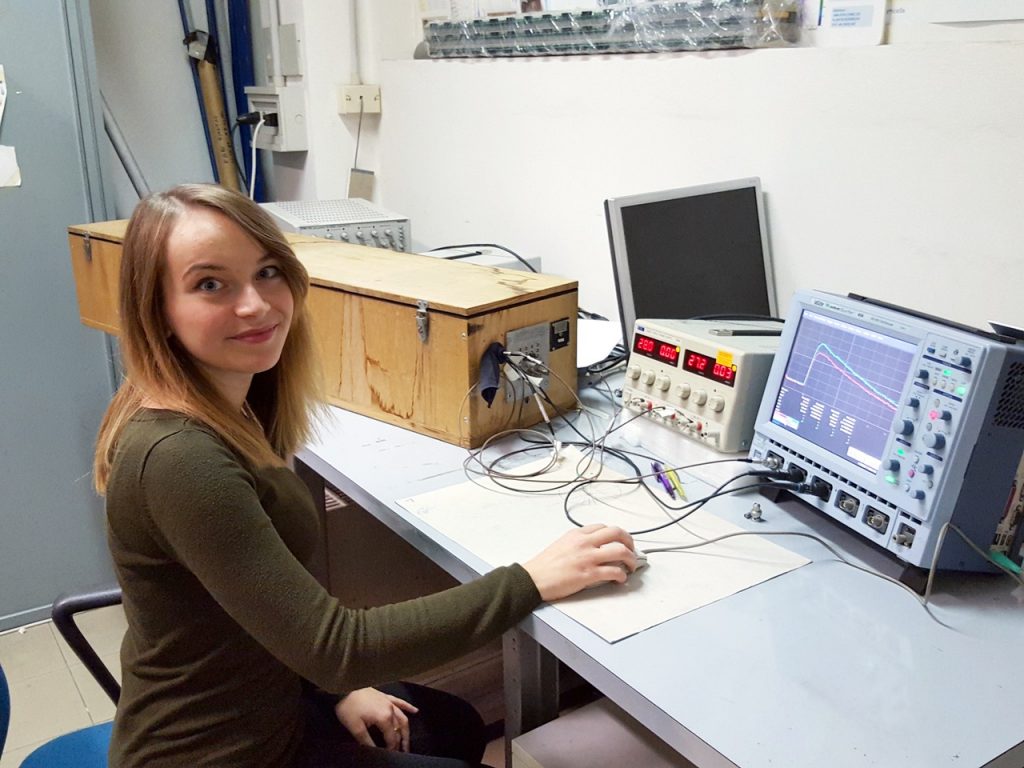 PolarQuEEEst is a special detector catching cosmic rays coming from the distant regions of our universe, particularly concentrated at the Poles. One of these special “telescopes” will be on board Nanuq to measure the cosmic ray flow at different latitudes. Miriam Santoro, a 22 yea- old student from Bologna University, is currently working on the cosmic ray experiment. She just finished her Bachelor thesis proposing the most compact possible size and the best geometry for the telescope on board Nanuq.

What are cosmic rays? Why is it important to study them?

Cosmic rays are charged particles coming from outer space and hitting our planet at the rate of 10 000 per second per square meter.

My interest for cosmic rays has historical roots. Cosmic rays were the first phenomena which produced elementary particles “naturally”. They could be detected on top of mountains, or at higher altitudes – for instance flying with hot air balloons, like their discoverer, Victor Hess did in 1912 –, with simple detectors such as Geiger counters. These cosmic particles are at the origin of particle physics, at a time when particle accelerators did not exist or, later, when they were not capable yet of reaching the high energies necessary to produce the particles we physicists want to study and that constitute today what we call the “Standard Model” of particle physics, i.e. the best scientific description of the fundamental constituents and forces of our Universe.

Nowadays cosmic rays still represent a source of new discoveries, because their origin is still unknown. Studying them may lead to a better understanding in many applied fields as well, such as climate sciences and satellite communications, or even highlight new physics phenomena yet to be discovered.

Why is it interesting to go close to the North Pole to measure them?

The Earth’s poles, and in particular the North Pole, which is ”easier” to access, are very strategic locations for the study of cosmic rays because their flux reaches a maximum there.

Another useful piece of information from a North Pole expedition may come from a connection through a GPS system among different telescopes at different latitudes (one in Norway, one in Italy), which is planned in the PolarQuEEEst experiment, to study extended (i.e. very high energy) cosmic rays, that might be detected simultaneously at different latitudes.

What are the difficulties of carrying those instruments on a sailboat in Arctic environment?

The main issue is certainly the size of the telescope. I am working on a crucial element of the instrument, called scintillator, that is a detector able to release light pulses when hit by radiation. It is crucial because it is thanks to this radiation, that we can detect the passage of cosmic rays through the instrument. I find it very challenging to build a scintillator of the size requested by Nanuq, that is 30 cm long, 20 cm wide and 1 cm deep. In addition, I am also working on the electronics of the instrument, that we call Silicon photomultipliers, or "SiPM”, which converts light and radiation signals in electric current. Their position in the scintillator is extremely important for the efficiency of detecting cosmic rays and it is a big challenge for me to identify their final configuration.

Do you have any specific goals for the Polarquest2018 expedition?

I really hope my study will contribute to the effort of having a high efficiency telescope. I tested my experimental prototype in 4 configurations and for each configuration I changed the SiPMs’ position in their direct coupling with scintillator to evaluate their output signals. I found that in two configurations SiPMs perform better than the other two. These results are important because they enable us to have a better performance using the same apparatus, changing only SiPMs’ position. So, I particularly hope my study on the geometry will help determine their final position.

I am continuing my studies in order to improve my knowledge in particle detectors to keep working on what’s becoming a more and more important tool in modern technology.